"I chose Trevor Hirst on personal recommendation. Trevor restored the car using all the original panels except for the running boards, which he re-made exactly to original specification. He also undertook extensive restoration, w 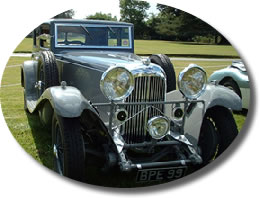 here required, to the original ash frame. All work, including the painting of the car, was done meticulously and to the highest standards. I would, without hesitation, recommend Trevor to carry out any major pre-war car restoration project."
Andrew Brackenbury - Lagonda LG45 Tourer

"Bought as a barn find, having been off the road and stored for about forty years. Trevor made an excellent job of the body, retaining most of the original timber and panelling, but the best compliment came from the painter, who did not know Trevor and had no idea who had done the work. He ran his hands over the body and exclaimed 'Now that's how a car should be when it reaches me, all I've got to do is just get on and paint it. Usually I've got days of preparation that should have been someone else's job - this time that's all been done properly!'
Jonathan Oppenheimer - Lagonda M45 Saloon

"Trevor did a complete body rebuild of my car. This involved research of original photos and similar models in order to return the car as much as possible to its original design. The car has since drawn many admiring comments. I would recommend Trevor's services to anyone considering a complex rebuild."
Ian Maxwell - 1931 Frazer Nash Boulogne

"Trevor Hirst has the eyes and the hands of a true craftsman. He can manipulate wood and metal as if they were made of rubber. Re-creations and innovations are all the same to him - all in a day's work."
Malcolm Tucker - Bentley and 20 hp Rolls-Royce.